by Susan Fischer
*
The Cambridge Companion to The Beatles (to be released December 31) is not your typical Beatles book. The book is a collection of essays written by professors, critics and Beatles experts alike. Its description touts the book as a tool for university courses as well as an essential part of the Beatles fan collection.
* 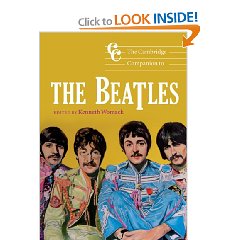 The book is comprised of three parts: Background, Works and History and Influence. The Background tells of the boys’ childhoods and also talks about the historical influences of the time and how that played a role in their upbringing. We learn a bit about what went on in society during the time, not just what went on in the Beatles family lives. We also learn about their recording life. How primitive recording was when they recorded their first song to the advances made through to the end. It tells of some techniques and tricks used to make their sound as rich as they could get it.
*
The second part, the Works, talks about recording. It analyzes each album, almost song by song. We learn about how the times changed the Lennon/McCartney writing styles — the influence of drugs and psychedelia to how they returned to their rock roots at the end.
*
Concepts and influences are looked at in great detail. Almost too much detail. As I was reading this part of the book, the pulling apart of the lyrics, I thought to myself, “Wow, John and George (probably Paul and Ringo too) would get a kick out of this.”
*
Lyrics that the Beatles claim to be nothing more than nonsense are given a breath of life that was unintended. It was almost laughable. In this reviewer’s opinion, “Norwegian Wood” was just a song, not intended for such in-depth analysis.
*
The Works also goes into the Beatles as solo artists. It goes through some of their actions and albums released after the break-up. The Works ends with a look into the music of the Beatles examining their rhythm and phrases and patterns. Perfect for the music theory enthusiasts.
*
The last section is History and Influence. This part looks back at the impact the Beatles had on music and culture. It also shows how powerful the Beatles are by examining the resurgence of the Beatles through the post break-up years. From the release of CD’s to the Beatles LOVE show, the Beatles still live on!
*
All in all, this book is very informative, but I don’t think the avid Beatles bio reader will get much new information from this book. It’s well written and will be great for college classes. Just remember folks — a lot of the Beatles writings and actions weren’t meant for such serious contemplation. Nevertheless, The Beatles were a band of ordinary guys who managed to do extraordinary things and anything that highlights that is OK by me.

One thought on “Beatles Book Review: The Cambridge Companion to The Beatles”