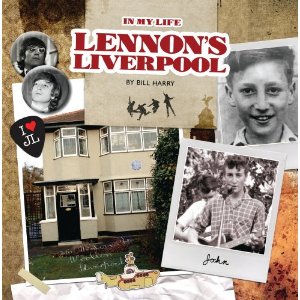 Following the recent focus on John Lennon’s teenage years inspired by the film, Nowhere Boy, a new book on the specific Liverpool locations in Lennon’s life has just been published. ‘Lennon’s Liverpool‘ by Bill Harry is a comprehensive look at the places which hold a significant connection to John Lennon’s early/pre-Beatle years. And who better to tell this story than a friend and fellow student at the Liverpool College of Art which John attended.

Bill Harry was a writer attending the Liverpool College of Art in the late 1950s at the same time that John Lennon and Stuart Sutcliffe were students. Along with artist Rod Murray, the four classmates became friends and would hang out at a local pub called Ye Cracke. These four young men, influenced by Jack Kerouac and The Beat Generation in America, would sit around and talk about poetry and music. They vowed that they would put Liverpool on the map to show how the city could inspire creativity. Each man in their own way, left their mark on the world, especially John Lennon. Over 40 years later, a plaque was put on display at Ye Cracke remembering ‘The Dissenters’ — John Lennon’s ‘other band’ which never played a note.
*
This is just one of the insider stories that Bill Harry shares in ‘Lennon’s Liverpool’ which is filled with full color photos of the famous schools and homes that played a role in John Lennon’s life. Beatle fans who have visited Liverpool most likely would not have been shown all of these locations on a typical two-hour guided tour. This book is a great resource for those who want the full Lennon experience in Liverpool.
*
There are a few factual mistakes which have been noted by a reviewer on Amazon.com citing that the years were incorrectly listed for the date of John and Cynthia’s marriage (should have said ‘1962’ not ‘1963’ on page 84), and the date for an award presented to The Beatles for ‘No 1 Group On Mersyside’ (should say ‘1962’, not ‘1961’ on page 107). These seem to be typos and, knowing Bill Harry’s history with The Beatles as publisher of Mersey Beat newspaper, would not reflect a lack of knowledge, but rather an unfortunate error.
*
While the book is not intended as a travel guide, it contains addresses of many of the locations. Along with many rare photos, you’ll discover locations not as well known like 93 Garmoyle Road where John’s future wife, Cynthia Powell, and Paul’s girlfriend at the time, Dot Rhone, shared a house or 3 Gambier Terrace where John Lennon and his roommates shared a flat.
*
This 8.25-inch square paperback at just over 100 pages would be something to take with you on your next trip to Liverpool, but you’ll still need a map to guide you around the city. ‘Lennon’s Liverpool’ gives you a lot more in-depth history and details than a travel guidebook while still being portable enough to take on the road.
— Trina Yannicos
*
‘Lennon’s Liverpool’ by Bill Harry is available through Amazon.com.
*
Note: ‘Lennon’s Liverpool’ is published by Trinity Mirror Media, who have also published a similar book on Paul McCartney’s young life in Liverpool called ‘The McCartney’s: In the Town Where They Were Born.’
*
Follow us on Twitter or Facebook for more Beatles news