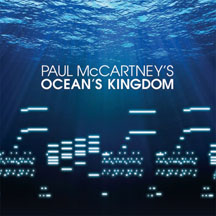 Ocean’s Kingdom is the result of a collaboration between Paul and New York City Ballet’s Master in Chief Peter Martins, who have worked together to present the world premiere of a new ballet for the company’s 2011/2012 season this September. The recording will be released by Hear Music/Telarc and is conducted by John Wilson, produced by John Fraser and performed by The London Classical Orchestra.

An hour long score featuring four stunning movements – “Ocean’s Kingdom,” “Hall of Dance,” “Imprisonment” and “Moonrise” – the ballet tells of a love story within the story of an underwater world whose people are threatened by the humans of Earth. The score is Paul’s most challenging and emotionally complex yet.

As he explains: “What was interesting was writing music that meant something expressively rather than just writing a song.  Trying to write something that expressed an emotion – so you have fear, love, anger, sadness to play with and I found that exciting and challenging.”

The artwork that accompanies the release is equally striking and inventive. Though it seems to suggest a city skyline, it is actually a digital readout of the notes from the ballet score.

The premiere of the ballet Ocean’s Kingdom will take place at NYCB’s Fall Gala on Thursday 22nd September 2011 while the release of the orchestral score will follow on October 4th, available digitally, on CD and on vinyl.  It was recorded in June in London.

A live recording of the world premiere gala performance by the New York City Ballet Orchestra will also be available as a bonus download.