Paul McCartney plays the role of “crooner” in the style of Frank Sinatra and Tony Bennett on his new CD, “Kisses on the Bottom“. However, the vocal style he utilizes to sing these classic songs like “It’s Only A Paper Moon” and “Home (When Shadows Fall)” is at a different vocal range than what Beatles/McCartney fans are used to. 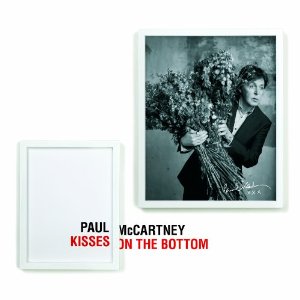 It almost sounds like Macca is pretending to perform as if he was another character– Macca the “jazz singer”. Very similar to the higher-pitched, whispery voice that he sang “Honey Pie” with on The Beatles’ White Album, this style works well on the humorous, light-hearted songs “My Very Good Friend the Milkman” and “I’m Gonna Sit Right Down and Write Myself a Letter”, but not so much on the more serious standards on the first half of the CD.

On the second half of the CD, McCartney’s voice returns more to the deeper singing voice that we are all used to on songs like “Ac-Cent-Tchu-Ate the Positive” and “Get Yourself Another Fool” which are quite enjoyable. The jazzy musical arrangements are led by Diana Krall and her band and produced by Tommy LiPuma.

Of course, as one would expect, Paul shines on the songs that he wrote himself, especially “My Valentine”. The included 6-page interview in the CD booklet reveals the interesting story about how “My Valentine” came about. McCartney wrote the song on a piano in the foyer of a hotel while on vacation in Morocco with then-girlfriend, Nancy Shevell. The inspiration came from a simple conversation about the rainy weather to which Shevell urged: “It doesn’t matter, we can still have a good time.”

Watch Paul McCartney sing “My Valentine” on the 2012 GRAMMYS:

The CD booklet is presented in a classy style featuring photographs from the special “Kisses on the Bottom” photo shoot taken by Paul’s daughter, Mary McCartney. Shots of the iconic Capitol Records tower are also included. Half of the album was recorded at Capitol Studios in Los Angeles, and the other half at Avatar Studios in New York, with orchestral arrangements recorded by the London Symphony Orchestra at Abbey Road Studios in London.

Kudos to Paul for following his creative heart and exploring the “jazzy” side of himself. We’ve seen McCartney go through different incarnations throughout his 50-year career including roles as the Fireman, the classical composer and now the jazz crooner. If you’re open to hearing another side of Paul, as well as another side of his voice, then give “Kisses on the Bottom” a try. I always have found that learning about The Beatles and solo Beatles’ music has led me to explore many other music genres and artists, and this CD is no exception.

Note: “Kisses on the Bottom” is available in the standard CD format with 14 tracks; as a digital download; in vinyl format; or the Deluxe CD with two bonus tracks plus access to a download of the Capitol Studios show (available via paulmccartney.com), plus longer liner notes and expanded packaging featuring three postcards. This review was based on the standard CD.