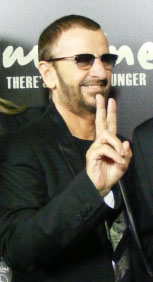 Biographer Michael Starr has two things in common with former Beatles drummer, Ringo Starr – the same last name and the passion to tell Ringo Starr’s life story. Ringo recently admitted that he was interested in writing his autobiography, but turned down the offer because the publishers want him to focus on just his 8 years with The Beatles. Ringo insists that his life before and after The Beatles should not be left out.

Michael Starr agrees that Ringo Starr’s entire life will be a fascinating subject for his new biography on the world’s most famous drummer. The author is sending out a request to Beatles fans for “anyone who has a Ringo story, or any info concerning Ringo, they can contact me at michaelsstarr@gmail.com.”

“My book will cover the entire arc of Ringo’s life, from his birth in Liverpool to the present-day,” Starr explains. “I’m very interested in exploring Ringo’s pre-Beatles life in Liverpool (family, friends, schooling, etc.) and how this shaped his life — since I feel this hasn’t ever really been covered with any depth (especially when compared to the early-life coverage of Paul McCartney, John Lennon and, to a lesser extent, George Harrison).”
*

The book is scheduled to be published in 2015. Starr has already written six entertainment biographies, on Peter Sellers, Art Carney, Joey Bishop, Bobby Darin, Raymond Burr and Redd Foxx. Michael Starr is also the television columnist for the NY Post.