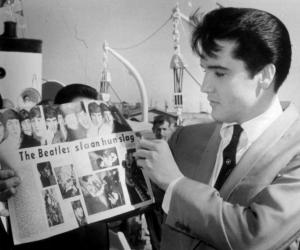 The most infamous rock and roll meeting of all time occurred when Elvis Presley met The Beatles. On August 27, 1965, John, Paul, George and Ringo along with their manager, publicist and assistants came to Presley’s house on Perugia Way in Los Angeles to meet their rock and roll idol.

The Beatles were the ones who pushed for the meeting. After all, it was Elvis who was one of the main influences for John Lennon to start the band. “Without Elvis, there would be no Beatles,” Lennon famously remarked in later years.

A British journalist who also attended the infamous meeting was Chris Hutchins, a reporter for the New Musical Express (NME) at the time. He had been documenting the anticipation of The Beatles’ possibly meeting Elvis since Paul McCartney called and spoke to Presley on the phone a year earlier.

During their concert tour in the summer of 1964, The Beatles tried to arrange a meeting with Elvis, but they could never coordinate their schedules. Instead, Colonel Parker visited with The Beatles and gave them gifts of Elvis souvenirs.

Finally, in August 1965, the stars seemed to align since The Beatles were in L.A. for their concert at The Hollywood Bowl and Elvis was in L.A. having just returned from Hawaii where he was filming Paradise Hawaiian Style.

Unfortunately, Colonel Parker, with the agreement of Brian Epstein, insisted that no pictures or video be taken of the infamous meeting. Therefore, this historic event is recounted solely through eyewitness accounts from the people who were there.

It was a typical night at Presley’s home with members of Elvis’ entourage on hand as well as a few of their female companions including Presley’s live-in girlfriend and future wife, Priscilla Presley. Also added to the mix was Colonel Parker who was there on this special occasion to make sure things ran smoothly. . . .

Finish reading the entire story in the new book:
ELVIS AND THE BEATLES: Love and Rivalry Between the Two Biggest Acts of the 20th Century