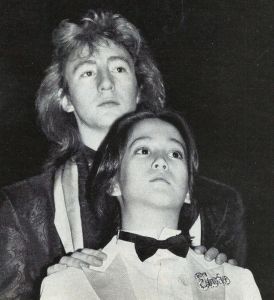 This month marks several Beatle-related anniversaries with The Rock and Roll Hall of Fame. Back in the 1980s and 1990s, the RRHOF Induction ceremony used to be held in January. In later years, the ceremony was moved to the Spring.

On January 20, 1988, The Beatles were inducted at the 3rd annual Rock and Roll Hall of Fame ceremony by Mick Jagger (click here for induction speech).

George Harrison, Ringo Starr, Yoko Ono, Julian and Sean Lennon accepted on behalf of The Beatles. Paul McCartney was not in attendance.

On January 19, 1994, John Lennon was inducted into the Rock and Roll Hall of Fame by Paul McCartney. He was the first member of the Beatles to be inducted on his own.

But on January 23, 1986, it was Julian Lennon and Sean Lennon who took part in the first annual Rock and Roll Hall of Fame induction ceremony. On behalf of their father, John Lennon, they helped induct Elvis Presley into the Rock and Roll Hall of Fame along with Jack Soden, President and Executive Director of Graceland, and Memphis DJ and close Elvis friend, George Klein.

Julian Lennon, aged 22, appeared in all black, while 10-year-old Sean Lennon was dressed in a handsome white tuxedo. Julian, with Sean standing at his side, was the first speaker in the presentation of Elvis Presley’s award, followed by Jack Soden. The award was then accepted on Elvis’ behalf by his close friend, George Klein.

John Lennon’s admiration for The King of Rock and Roll is now common knowledge among music fans. Lennon said his love for rock and roll was inspired first and foremost by Presley. He credits his motivation to form his first band, which evolved into The Beatles, as a result of wanting to be just like Elvis. Even after the group took shape, their goal of being “bigger than Elvis” helped them achieve worldwide success.

That night at the induction ceremony, Julian Lennon started out with a brief introduction: “Our father was a big fan of Elvis’s and, of course, Elvis was loved all over the world, and we are all influenced [by] him,” Julian said. “I think a lot of people in the world get a lot of pleasure from listening to him and love him greatly.”

Then he read a direct quote from John Lennon, which spoke volumes: “Elvis was the thing, whatever people say, he was it. I was not competing against Elvis, rock happened to be the media I was born into – it was the one, that’s all. Those people who picked up paintbrushes, like Van Gogh, probably wanted to be Renoir or whomever went before him. I wanted to be Elvis.”

Then, Jack Soden read a brief statement from Lisa Marie Presley. He then introduced George Klein, who gave a dramatic and celebratory speech about his friend and best man at his wedding, Elvis Presley. Here is just a brief part of the speech:

“On January 8, 1935, a star was born. You see a star is not made, a star is born… The real honest to goodness rags to riches rise of the most inspiring version of the American Dream to ever happen. In doing so, Elvis fulfilled the hopes and dreams of an entire generation. The world was never to be the same again. You see Elvis Presley wasn’t a star, he was a damn galaxy!”

Other inductees that night at the induction ceremony in New York City included Little Richard, Jerry Lee Lewis, James Brown, Chuck Berry, Buddy Holly and Sam Phillips. Notably, Elvis Presley holds the record for being inducted into the greatest number of Music Hall of Fames – 16 to be exact.
*

If you enjoyed this article, more fascinating stories about Elvis Presley and The Beatles can be found in the new book, ELVIS AND THE BEATLES: Love and Rivalry Between the Two Biggest Acts of the 20th Century

For the latest Beatles news, merchandise and events, sign up for our
Daytrippin’ Beatles newsletter: click here to subscribe.
Note: this newsletter is different from following our blog posts)