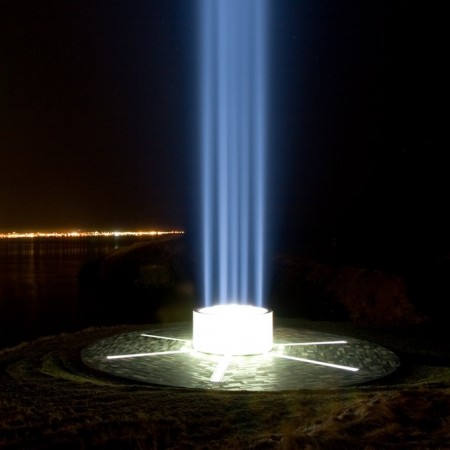 It all started with Yoko Ono’s 1964 book, Grapefruit, where she talked about her artistic concept of creating a lighthouse. Ono’s “Light House” further described in her 1965 “Architectural Works Sales List” was a “house constructed of light from prisms, which exists in accordance with the changes in the day.”

When her relationship started with John Lennon in 1967, Lennon asked Ono if she could build him a “Light House” in his garden like the one he had read about in her publication. Yoko explained to John that her idea was conceptual: “I’m convinced that one day, it could be built, but I don’t know how to do it,” she told him with a laugh.

Forty years later on October 9, 2007, a lighthouse called the Imagine Peace Tower was launched by Yoko Ono in collaboration with the city of Reykjavík, Iceland. The circular structure, located waterside on Videy Island off the north coast of Reykjavík, is a powerful ray of light that shoots up towards the sky. The wishing well shines every year between October 9, Lennon’s birthday, and December 8, the anniversary of his death and represents people’s wishes for world peace.

“Actually, this is an answered prayer because my first time in John’s house he talked about building a lighthouse. I never knew how to conceptualize that,” Yoko explained. “I never believed this could be reality.”

Due to the heavy expense and maintenance to keep the structure lit 365 days a year, Yoko decided to have the Imagine Peace Tower lit between the two most significant dates in Lennon’s life, in addition to a few other selected weeks throughout the year.

“I realized that, with contrasting the two symbolic dates, it gives an understanding of the shortness of life, and eternity of the spirit,” Ono said. “It reminds one how brief life can be and is significant even for those not into John Lennon’s life.” 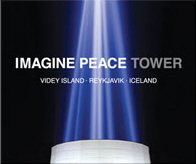 “Imagine Peace,” a phrase that symbolizes John and Yoko’s campaign for peace, is inscribed on this outdoor work of art in 24 different languages. One of the reasons Yoko chose to erect the tower in Iceland was because it is “a peaceful country with no military,” as reported by the Iceland Post.
.
Perhaps her greatest work of art, the Imagine Peace Tower took Ono three years to develop with engineers in Iceland. As described in the official Imagine Peace Tower book, there are six mirrors “angled at 45 degrees which act as prisms” inside the wishing well, which when combined with the nine searchlights on the floor, result in a tower of light created from 15 beams.

At the 2007 unveiling on Lennon’s 67th birthday, Ono said she was convinced that John Lennon would have been pleased with the Tower. “I dedicate this light tower to John Lennon. My love for you is forever,” she said.

Yoko encourages everyone to send their wishes of peace to the Imagine Peace Tower via Twitter, e-mail or postcards. A webcam of the Tower is available for viewing at http://imaginepeacetower.com/
***

One thought on “John Lennon memorial, the Imagine Peace Tower, was 40 years in the making”