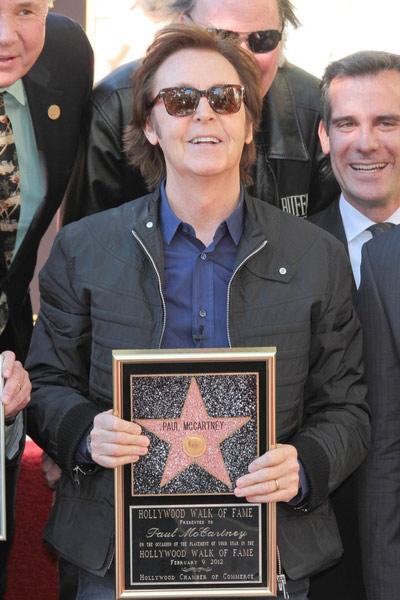 Fans lined up around the huge block at the Capitol Records building on Thursday morning, February 9, 2012, to see Paul McCartney finally get his star on the Hollywood Walk of Fame. McCartney had been eligible to receive the star since 1993, but had never scheduled the time to appear at a ceremony until this day.

Guest speaker Neil Young spoke of his admiration of the former Beatle:

“When I was in high school and The Beatles came out, I loved the Beatles and I tried to learn how to play like them and no one could figure out what Paul was doing on the bass. Not only was he playing differently because he played it left-handed, he played notes that no one had put together before ever that made everyone stand in awe of this great musician…As a musician and as a songwriter that Paul’s craft and his art is truly at the top of the game like Charlie Chaplin was a great actor.”

Paul McCartney was in Hollywood promoting his new album just released called Kisses on the Bottom, a collection of classic standards that McCartney had been wanting to record for years. However, his award speech harkened back to his early days:

“Way back in history in Liverpool when we were kids and we were listening to Buddy Holly and all the rock and roll greats, I would have never thought that the day would come when I would be getting a star on the Hollywood Walk of Fame. I thought it was an impossible thing to happen. But here we are today and it’s happening.”

“I couldn’t have done it without certainly three boys,” McCartney continued. “So I want to say thanks to those guys John, George and Ringo for being so… Ringo’s a bit under the weather today so he couldn’t come, but we send our love. Let’s hear it for Ringo! I want to thank those guys and bless them for being in my life.”

“I also want to thank my family without whom I couldn’t have done it. I have two family members here today, My lovely wife Nancy and my lovely son James. So thanks to them and all the rest of my beautiful family. And thanks to all my friends for showing up. We’ve got a lot of great friends here today. And thank you to Neil for saying those words.

“So thanks to everyone. It’s really great and Thanks to all of you. Thanks to all the fans around the world again without whom, it wouldn’t have been possible. So I’d like to just send you all Hugs and Kisses on the Bottom. Thank you so much, I love you.”

McCartney’s was the final star to be dedicated of the former Beatles bandmates. His star is the last in a row on the sidewalk on Vine Street in front of Capitol Records, following John Lennon, George Harrison and Ringo Starr, in chronological order of dedication ceremonies. McCartney’s star is also next to rock and roll pioneer, Buddy Holly. The Beatles star is located on a special triangular intersection at the intersection of Hollywood Blvd and La Brea next to Elvis Presley’s star.

Related:
A Look Back at George Harrison’s Hollywood Walk of Fame ceremony