The highlight of the Carpool Karaoke segment with Paul McCartney on The Late Late Show with James Corden wasn’t just the karaoke. McCartney gave Corden a tour of his hometown of Liverpool which made for some historic moments.

While driving through the streets of Liverpool, McCartney joined Corden in singing along to Beatles’ classics like “Drive My Car”, “Let It Be”, “Blackbird”, and a new McCartney song “Come On To Me” from his upcoming album, Egypt Station. When they were driving on Penny Lane, Corden and McCartney sang along to the Beatles’ song “Penny Lane”, which made this thoroughfare so famous.

McCartney and Corden got out of the car and walked along Penny Lane to the barber shop. Paul McCartney also signed his autograph on one of the painted signs for Penny Lane. As you may know, the street signs are painted because Beatles fans used to steal the actual signs for souvenirs. Corden and McCartney also posed for a Penny Lane selfie. 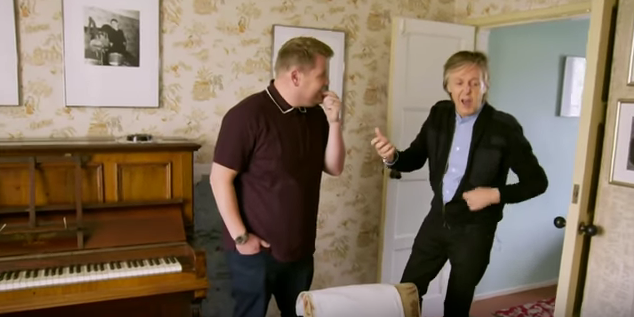 They continued on to Paul McCartney’s childhood home on Forthlin Road which is now a historic home preserved by UK’s National Trust. The Trust offers tours of the home to show what it was like when Paul McCartney lived here as a teenager as The Beatles became a group. As they approached the home, McCartney confessed: “I’ve never been in since I lived there.” 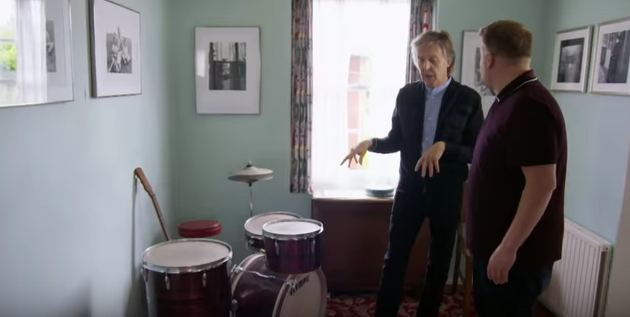 Corden got the ultimate private tour with McCartney showing him around his childhood home. He showed Corden the room where he and John Lennon used to write songs. Paul told Corden the story of how when he and Lennon first played “She Loves You” for McCartney’s father, the elder McCartney suggested that they change the lyrics from “Yeah, Yeah, Yeah” to “Yes, Yes, Yes.” Needless to say, Lennon and McCartney didn’t take his advice.

Then, as he played the piano, McCartney treated Corden to a live version of “When I’m 64”. When asked how he felt being back in his childhood home, McCartney responded: “It makes me realize how long the journey has been to date… The distance from here to where we went and where we are now, it’s like phenomenal.”

Back in the car, Corden added some of his lighthearted humor as he dressed up in various Beatles outfits including an early Beatles suit and wig, and a Sgt. Pepper costume.

“If I was you, I’d just stick to polo shirts and jeans,” said McCartney. 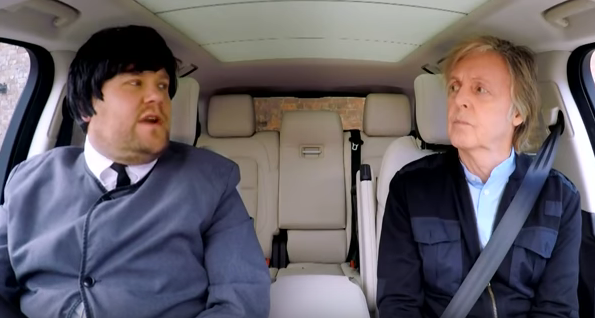 To end the historic day, Corden and McCartney head to The Philharmonic pub, where Paul gave a surprise concert for about 50 unsuspecting patrons. Corden acted like a bartender and encouraged pub-goers to use the jukebox.

All of a sudden the jukebox came to life with Paul McCartney and his band appearing from behind a stage curtain. Paul performed a surprise concert with songs like “A Hard Day’s Night,” “Ob-La-Di Ob-La-Da,” “Love Me Do” and “Back in the USSR.” For the finale, he asked Corden to join him onstage to sing “Hey Jude.”

Not shown in the video is a quick stop at the Pier Head for a selfie in front of The Beatles statue. How iconic to have Paul McCartney posing with his younger self – truly a day watching Beatles history play out in Liverpool!

You can watch the entire TV segment here: