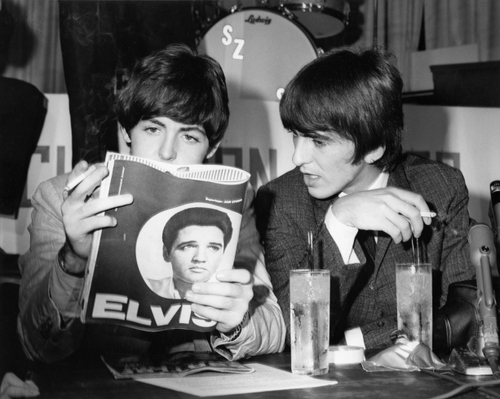 The most infamous rock and roll meeting of all time occurred when Elvis Presley met The Beatles. On August 27, 1965, John, Paul, George and Ringo along with their manager, publicist and assistants came to Presley’s house on Perugia Way in Los Angeles to meet their rock and roll idol.

The Beatles were the ones who pushed for the meeting. After all, it was Elvis who was one of the main influences for John Lennon to start the band. “Without Elvis, there would be no Beatles,” Lennon famously remarked in later years.

END_OF_DOCUMENT_TOKEN_TO_BE_REPLACED 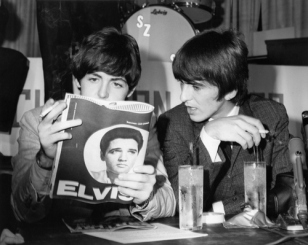 The most legendary meeting in rock and roll history between Elvis Presley and The Beatles took place on August 27, 1965 with one caveat – absolutely no photos or recordings allowed! But did that also mean that there were not any reporters or journalists present?

It is well known that there were no official photos taken of the meeting or any recordings made during the alleged “jam” session. However, music fans may be surprised to learn that there was one British journalist present inside the house when The Beatles met Elvis.

The request for no photos was made by Presley’s manager, Colonel Tom Parker, when finalizing the details of the meeting with The Beatles’ manager, Brian Epstein. The Beatles were happy to comply with this. They didn’t want a media circus surrounding the precious moment when they would get to meet one of their biggest music idols, The King of Rock and Roll.

*
However, The Beatles had to include one reporter from the UK music magazine, NME, or New Musical Express, in their entourage. His name was Chris Hutchins and he played an integral part in setting up the meeting. He had contacts with both The Beatles and Colonel Parker, and he was the one who initiated communication between the two camps.

Hutchins had been covering The Beatles during their U.S. tours and he frequently reported his firsthand accounts with The Beatles in the NME. On August 28, 1964, Hutchins reported in an NME article that Presley had invited The Beatles to meet with him at Graceland in Memphis, because he missed them in Los Angeles.

Unfortunately, The Beatles would not be able to stop in Memphis at that point in their schedule. So, instead, according to Hutchins, Brian Epstein and Colonel Parker had their own meeting in Los Angeles. The next day, The Beatles met Colonel Parker and he gave them gifts including leather belts with western holsters. Meanwhile, Hutchins helped put Paul McCartney in touch with Elvis and they spoke briefly on the phone.

The following year, on May 28, 1965, Hutchins reported in the NME that the Beatles were hoping to meet Elvis in August when they were back in Los Angeles for their U.S. tour. At that point, they were told that Elvis was scheduled to be in Hawaii filming Paradise Hawaiian Style, and they were out of luck.

But things changed in August, when Elvis returned early from filming. On August 27, 1965, the day the actual meeting took place, a story ran in the NME by Hutchins with the headline “NME is arranging a meeting between Elvis and Beatles!”

Finally, on September 3, 1965, the NME ran their exclusive story on the meeting. The headline stated: “NME has only reporter present when Elvis meets Beatles.”

In the article, Hutchins states that there was an informal jam session which started with Elvis playing the bass along to records playing on his jukebox. John, Paul and George were reportedly provided with guitars. However, there was no drum set for Ringo. “They used language of music!” a callout in the article read.

This inevitably formed the basis for the never-ending stories provided by friends of Elvis who were there that night as well as members of The Beatles’ entourage. While some of the eyewitness accounts that have come out over the years may be embellished or dispute what actually happened that night, one thing that should be clear is who was actually there.
The Beatles’ publicist, Tony Barrow, confirmed in his 2006 book, John, Paul, George, Ringo and Me, that Hutchins was present:

“Having acted as a catalyst to get the whole shindig off the ground, of course Chris Hutchins had to be invited. And if even a single journalist was to be involved, The Beatles wanted to bring me along. Presley would have his army of minders, the self-styled Memphis Mafia, on hand, so The Beatles’ roadies, Neil and Mal, made it onto the swelling list of guests, along with their driver, Alf Bicknell.  John said: ‘Let’s stop there or it’ll get out of control.’”

Hutchins also appears in two of the four rare photos that were taken that night by a fan as The Beatles were leaving and getting into their limos. In the photo below, Elvis, in a red shirt and black jacket, stands behind Hutchins who is wearing dark sunglasses.

However, in 2014, British journalist Ivor Davis claimed in his book, The Beatles and Me on Tour, that he was also present at the meeting. He had traveled with The Beatles on their 1964 U.S. tour reporting for the London Daily Express.

From the chapter in his book titled “Elvis, We Hardly Knew Ye”, Davis says: “Shortly before six o’clock on the evening of August 27, 1965, I got a call at home from Mal. ‘Ivor, get over to the house in an hour – we’re all going to see Elvis.'”

The fact that a second journalist would be invited to the secret meeting seems highly unlikely. There were already strict orders from Colonel Parker that no press, except for Hutchins, were to be permitted. And Mal Evans was even a bigger Elvis fan than John, Paul, George and Ringo. The fact that Mal would jeopardize the plans for the meeting seems suspect. But, unfortunately, since Mal died in 1976, it is not possible to get his response.

“The deal with Hutchins was that there would be no pictures, no taping, no leaking of details in advance,” Tony Barrow explained in a 1994 essay. “Keeping the time and place confidential was in his interests because Hutchins would have the story exclusively to himself. The Beatles’ manager, Brian Epstein, was nervous about a leak and warned me, ‘The boys will pull out if the rest of the press find out.'”

But there is a chance that Davis may have been present OUTSIDE the house with other reporters and fans who found out about the meeting.

As Tony Barrow explains, “I was not surprised to find that news of the Presley-Fab Four party did reach some of our media entourage despite our great efforts to keep all of the details to ourselves… Several of the most enterprising guys, including Daily Express West Coast correspondent Ivor Davis and the intrepid Larry Kane, joined forces to tail our limousines as we left The Beatles’ villa.”

To his own admission, Davis did not feel the need to report on the fact that The Beatles had finally met Elvis. No story on one of the biggest show business meetings of all time?

“We wrote very little about the meeting – bizarrely, in retrospect, none of us thought there was much to write about,” Davis stated in his book. “And without pictures (not even a pool photographer to record the meeting), my editor in London ruled that they wouldn’t need my story.”

In email correspondence with Daytrippin’ from 2015, Chris Hutchins absolutely refuted the possibility that there were any other reporters present:

“I can assure you that I was the only journalist present on the night I arranged for the Beatles to meet and spend some time with Elvis Presley in August 1965. As you will have read in my books it was almost three years after John Lennon asked me if I could ever arrange such a meeting up to the time it took place. During their summer tour of 1964 I took Elvis’s manager, Colonel Tom Parker (who became something of a mentor to me) to meet the Beatles at their rented home in Benedict Canyon and he promised them in front of me ‘that Chris here and I will do whatever we can to make sure you meet him.’

The following summer I had several meetings with the Colonel, then with Elvis himself to agree the meeting should take place. Next I set up and attended meetings with the Colonel and Brian Epstein to sort out the details. The Colonel insisted that (a) the meeting had go be at Elvis’s house (b) there were to be no photographs taken or recordings made and (c) there were to be ‘no journalists other than me present and no ‘hangers on’ in Elvis’s house.’

I am aware that others have claimed to be there and written accounts – largely using information I published later with the consent of the Beatles, the Colonel and Brian Epstein. Rest assured they were not there.”