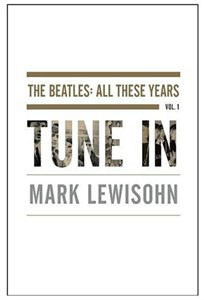 The first thing I do when I receive a new biography is look at the pictures inside. There seems to be a correlation between the rarity of photos/specificity of photo captions in a biography and the level of detail and depth of knowledge presented in the biography’s text. The photos and their captions can give you a good idea of what to expect in the biography, and yet sometimes can raise a red flag (as in the case of a previous Beatles tome).

When you peruse the photos included in “Tune In: The Beatles: All These Years, Volume 1“, you quickly get a sense of how deep the author dove into Beatles history for this comprehensive work. There are three sections of photos in “Tune In” with about 50 percent of the photos rarely, if not ever, seen before.

My favorites include a photo of 13-year-old George Harrison with a female childhood pal; a picture of John Lennon’s Aunt Mimi and Uncle George; a 1961 photo of John and Paul (slicked back hairstyle) with Bob Wooler; and a photo of Ringo clowning around in his bathing suit at Butlin’s summer camp in 1961.
*
The book starts with the ancestral history of each Beatle and stops at the end of 1962 making way for two more volumes to complete the history of the Beatles. Since “Tune In” is over 900 pages which will take a while to fully absorb, I thought I’d jump right into two key moments in the history of The Beatles to see what new facts I could learn.
*
John Lennon first meets Paul McCartney in 1957
*
Most Beatles fans know the general story of how John and Paul first met on July 6, 1957, when John Lennon was performing with his band, The Quarrymen, at a local church festival. Paul McCartney came to the event with a mutual friend of his and John’s named Ivan Vaughn. After the Quarrymen’s performance, Ivan introduces Paul to John. Paul impresses John when he sings and plays “Twenty Flight Rock” on the guitar, and John eventually asks Paul to join the band.
*
However, Lewisohn reveals a few new and relatively unknown facts. Some people may assume this was just a quick meeting, almost like an audition. But Lewisohn describes McCartney hanging out with Lennon and his friends for several hours until The Quarrymen were scheduled to play at a nearby church that night for a dance around 8 pm.
*
While waiting around at this other church hall, the boys had access to a piano. Paul took it upon himself to launch into his Little Richard mode and play “Long Tall Sally,” which further impressed John.
*
Not only that, but the performance of the Quarrymen that night was recorded by a young boy in the audience. The existing tape contains two songs by the Quarrymen including Lennon singing Elvis’ version of “Baby Let’s Play House.”
*
And a final revelation: July 6, 1957 may not have been the first time John and Paul met. “Tune In” reveals that Paul may have met John before this fateful day simply out and about around Liverpool. But that’s just a (long) footnote in the vastly complex story of The Beatles.
*
Ringo Starr joins The Beatles in 1962
*
The big revelation in this part of Beatles history is that George was the one who pushed for Ringo to join the group. I was surprised to learn this especially with the perceived notion (right or wrong) that George was still considered a kid by John and Paul in 1962, and his opinion may not have had much weight. But this also explains why George and Ringo had such a tight bond over the years. Neil Aspinall said, Ringo “felt he owed George.”
*
Nevertheless, it wasn’t a hard sell to bring Ringo into the group. Lewisohn does a great job in describing how impressive Ringo was to The Beatles. Ringo was older than the rest of the group and seen as more worldly. His quick wit and personality also made a huge difference. While the official explanation of sacking Pete Best has always been that Ringo was a better drummer, my belief, which is also suggested by Lewisohn, is that the Beatles got along much better with Ringo than compared to Pete. As Ringo said in 1964: “I was lucky to be on their wavelength when I joined the group. I had to be or I wouldn’t have lasted. They all have strong personalities and unless you can match it, you’re in a bit of trouble.”
*
Lewisohn also reveals Neil Aspinall’s revelatory explanation of why the nomenclature of “John, Paul, George and Ringo” makes even more sense. Lewisohn describes John bringing Paul into the group, Paul bringing George into the group, and George bringing Ringo into the group– a new way of looking at the hierarchy of the four lads from Liverpool.
*
Mark Lewisohn deserves tremendous accolades for all the research that he’s done on this overwhelming project. Lewisohn is one of the most respected Beatles’ historians and is an obvious choice to take on this ultimate Beatles biography. His previous books include “The Beatles Recording Sessions,” “The Complete Beatles Chronicle” and “The Beatles’ London” (coauthor) as well as writing for official Beatles’ projects including “The Beatles Anthology”.
*
It took Lewisohn 8 years to complete the first volume (which included research for the 2nd and 3rd volumes as well), so it makes sense that it will probably take the next three years for Beatles fans to fully digest this book and appreciate all of the revelations uncovered. By then Volume 2 will be out (Lewisohn’s most recent estimate is 2016) and we can start this entire process over again.
–Trina Yannicos
*
Note: There is also a “Tune In: Extended Version” of 1,728 pages which comes in a set of two volumes. The hardcover and e-book will be released on November 14. For ordering information, visit  http://www.thebeatlesbiography.com/
*
For more Beatles news, follow Daytrippin’ on Twitter and Facebook.