On April 14, 2009, George Harrison was posthumously given a star on the Hollywood Walk of Fame. This was the 2,382nd star dedicated by the Hollywood Chamber of Commerce. The star is located right in front of the Capitol Records building at 1750 Vine Street just a few steps away from the star of Harrison’s former bandmates, John Lennon, and later Ringo Starr (2010) and Paul McCartney (2012).

Hundreds of Beatles fans gathered to hear tributes to George Harrison given by his friends and family. Eric Idle of Monty Python and Spamalot fame called George “a most remarkable person with a great sense of humor.” Eric Idle wrote and starred in the 1978 Beatles-parody film, All You Need Is Cash featuring The Rutles, which George Harrison not only loved but also made a brief cameo appearance in.

Eric Idle joked that he asked Ringo Starr what he should say at the dedication ceremony and Ringo said, “What about me?” referring to the fact that Ringo did not have a star on the Hollywood Walk of Fame at that time. Neither did Paul McCartney, who was in attendance at the ceremony, with then-girlfriend Nancy Shevell. The Beatles as a group were given a star in the 1990s which is located on a special sidewalk corner at the intersection of Hollywood Blvd and La Brea next to Elvis Presley’s star.

Tom Hanks, who spoke at the ceremony, described the The Beatles’ impact on America in the 1960s: “That’s when we escaped the doldrums and moved into the future.” He explained that the first guitar George Harrison ever bought when he was a teenager only cost the equivalent of 75 cents. “75 cents made this” he said, pointing to the Capitol Records building, the home of the Beatles’ record label in the U.S.

Other guests in attendance included Tom Petty and Jeff Lynne who were in the Traveling Wilburys with Harrison in the 1980s. Jeff Lynne put an ad in The Hollywood Reporter (April 14, 2009) celebrating George Harrison’s star which said, “George Harrison’s Star, It Just Sounds Right. Love from Jeff Lynne.”

The Counsel General from Bangladesh was also in attendance bringing attention to the famous “Concert for Bangladesh” that Harrison organized in 1971 to raise money for the relief of refugees in Bangladesh. It was the first major rock concert for charity and raised almost $250,000 at the time. Today, sales of the album and DVD benefit the George Harrison Fund for UNICEF. 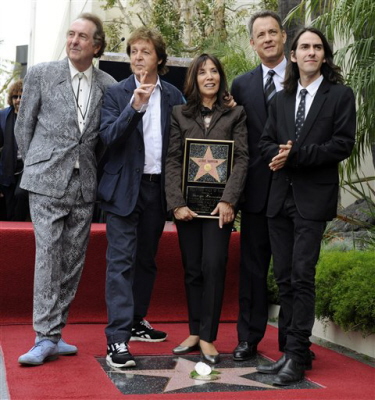 Harrison’s widow, Olivia, and son, Dhani, were both in attendance to accept the award. Olivia described George as “a beautiful, mystical man living in a material world.” She concluded by saying, “George, this day is for you.” And she was right — it was announced at the ceremony that April 14 was proclaimed “George Harrison Day” in Los Angeles.

While George Harrison was honored for his musical achievements with The Beatles and as a solo artist, his contributions to the film industry through his company HandMade Films were highlighted by his widow, Olivia Harrison. In an interview with The Hollywood Reporter, Olivia listed George’s film achievements including the 1974 film of the socio-political stage play Little Malcolm starring John Hurt, the cult favorite Withnail & I (1987) and the legendary Life of Brian.

Throughout his post-Beatles career George Harrison shied away from the limelight and preferred to spend time in his garden at his home in England. Olivia remarked, “Although George would probably place his star in a garden, I think the Capitol Tower near one of his closest friends is a pretty good spot.”

**
Sign up for the Daytrippin’ Beatles newsletter and get a free gift: http://bit.ly/1MglmPy

Note: this newsletter is different from following our blog posts)