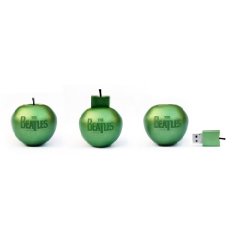 The apple-shaped USB drive will be loaded with the 14 remastered Beatles’ stereo titles, which were released on CD on September 9, as well as all of the re-mastered CDs’ visual elements, including 13 mini-documentary films about the studio albums, replicated original UK album art, rare photos and expanded liner notes.

The USB will be released on December 7 (December 8 in North America) and will be fully compatible with PC and Mac.