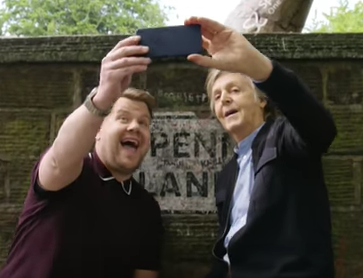 The highlight of the Carpool Karaoke segment with Paul McCartney on The Late Late Show with James Corden wasn’t just the karaoke. McCartney gave Corden a tour of his hometown of Liverpool which made for some historic moments.

END_OF_DOCUMENT_TOKEN_TO_BE_REPLACED 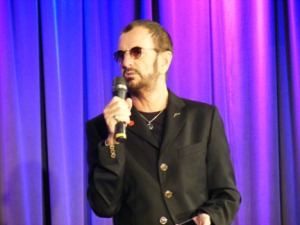 AXS TV announced on July 1 that it will celebrate the life and legacy of Ringo Starr, with the once-in-a-lifetime tribute concert “Ringo Starr: A Lifetime of Peace and Love,” on Sunday, July 13, at 8 p.m. ET. The David Lynch Foundation hosts the benefit event, presenting Starr with the Lifetime of Peace and Love Award for his dedication to spreading peace and love throughout the world as a pioneer of transcendental meditation—a method for self-development, stress reduction, and relaxation, that Starr famously began practicing during the Beatles’ trip to India in 1968.

Filmed at the El Rey Theatre in Los Angeles on January 21, 2014 the unprecedented event is packed with heartfelt moments and great performances from some of music’s biggest names who have come together for the first ever tribute celebrating Starr’s music. Highlights include video tributes from Paul McCartney and Yoko Ono; Betty LaVette performing “It Don’t Come Easy”; Ben Folds with “Oh My My”; Ben Harper on “Walk With You”; Joe Walsh with the rocking “Back Off Boogaloo”; Brendon Benson revving up “Don’t Go Where The Road Don’t Go”; The Head and the Heart doing the timeless classic “Octopuses Garden”; and kicking it all off Giles McWilliams from Ark Life with “Can’t Do it Wrong.”

Serving as house band for the evening is a super-group of rock royalty led by GRAMMY®-winner Don Was on bass; Benmont Tench (Tom Petty & the Heartbreakers) on keyboards; iconic axemen Peter Frampton and Steve Lukather (Toto) on guitars; and Kenny Arnoff (John Mellencamp) on drums.

The guest of honor himself, Ringo Starr, closes out the evening with a spectacular three song set, “Photograph” and “Boys,” and then for the finale, inviting all of the night’s performers—along with members of the star studded audience including Eric Burdon, Gary Wright, Gregg Bissonette, Jeff Lynne, Colin Hay, Richard Page, Sheila E., Edgar Winter, and comedian Jim Carrey—back on stage to join in an epic sing-along of “With a Little Help from My Friends.”

Watch an excerpt from the show here:

“Ringo Starr is one of the true unsung heroes of rock n’ roll,” said AXS TV founder Mark Cuban. “The wide-reaching impact he’s had on the industry—both as an artist and a humanitarian—is on full display here, as evidenced by the variety of high-level performers that came out to pay tribute to his legacy. This is absolutely one of the most unique events you will see this year, and AXS TV is proud to be a part of it.”

The David Lynch Foundation was founded in 2005, as a means of providing transcendental meditation training to adults and children throughout the world. Since that time, the foundation has treated tens of thousands of people, with special programs developed for underprivileged students, survivors of domestic violence, and veterans suffering from post-traumatic stress. The foundation launched the Ringo Starr Peace and Love Fund in January of 2014.

For information on how to make a donation to the Ringo Starr Peace and Love Fund, please visit: http://www.davidlynchfoundation.org/peacelovefund/